Working toward a Dementia Friendly Community

Dementia Friendly Swansea focuses on improving the quality of life for people living with dementia. The first Forum meeting was held in July 2013 with 20 people in attendance. It has now grown to over 70 members that includes solicitors, healthcare professionals/institutions, local authority, small businesses and volunteers.

The Forum meets bimonthly to discuss dementia friendly projects and initiatives in the area. It also creates an essential network between organisations for information sharing and identifying areas for improvement.

As of the AGM in July 2016, it was voted to change the name of Dementia Supportive Community Swansea to Dementia Friendly Swansea. This was to bring the organisation in line with other Dementia Friendly Communities around Wales and tie in with our online presence. 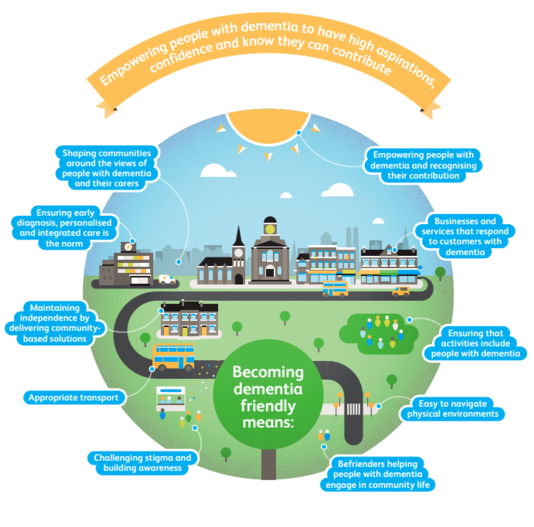 Forum members cascade the dementia friendly approach throughout their organisations and beyond. For example, there are organisational links with the ABMU, South Wales Police and Ambulance Service. A number of employees of these organisations are members of the Forum and have been involved in the promotion of the South Wales Police’s Keep Safe Cymru Cards, the local implementation of the Herbert Protocol in care homes, and providing Dementia Friends training to staff in the police, ABMU and local area of Welsh Ambulance Service Trust.

The Ambulance Service in Swansea was the first in Wales to become Dementia Friendly, and this is now being rolled out across the Principality. In 2014, The Alzheimer’s Society recognised the work of the Swansea Dementia Supportive Community forum by recognising it as the first Dementia Friendly City in Wales.

Find out how you can get involved with Dementia Friendly Swansea

Get Involved
Dementia Hwb is a project by Dementia Friendly Swansea, Charity Number 119456.