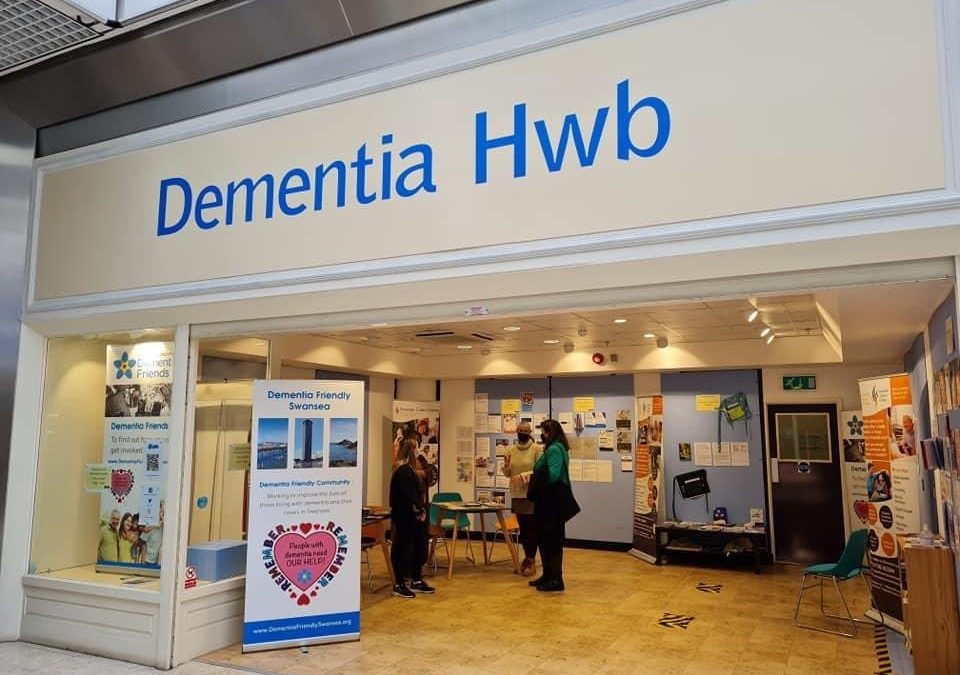 Now the Dementia Hwb in The Quadrant shopping centre in the centre of Swansea has been open for 3 months, we have had 559 recorded visitors needing support in a variety of ways, some of these have been considered crisis cases by Healthboard and experienced Third sector staff and a number have been very tearful visitors, clearly in desperate need of support.

April’s Review has been put together by Project Development Officer, Abi Davies, some of this is below. If you would like any further detail please do get in touch. Email abi.davies@dementiafriendlyswansea.org

This is based on the data collected throughout April for the recorded 180 visitors. Recorded visitors being those who had an interaction with a volunteer, therefore those who did not were not recorded i.e. walked in to pick up a leaflet and left.

Similar to our first two months open, carers appear to be the most frequent visitors to the Hwb (46%). Visitors also include those seeking information on behalf of a friend or family member (17%), individuals diagnosed with dementia (8%), or seeking a diagnosis (12%), local support (13%), and former carers who did not receive the support they needed, prior to the cared for passing away (1%).

Throughout April we have also experienced a small proportion of visitors enquiring about other conditions, including Autism, Mental Health, Epilepsy and Parkinson’s disease (3%).

The majority of visitors are looking for information on dementia or a general chat about dementia.
Followed by those seeking a diagnosis, needing general advice and financial advice, and carers seeking support.
The Hwb is beginning to see visitors return. This is a good foundation which suggests that people find us useful, and will continue to use our service as and when they need.
The ‘Directed to..’ section reflects:

The number of times a visitor was referred to/directed to a particular organisation.
‘Directed to leaflets’ includes leaflets across all available organisations. 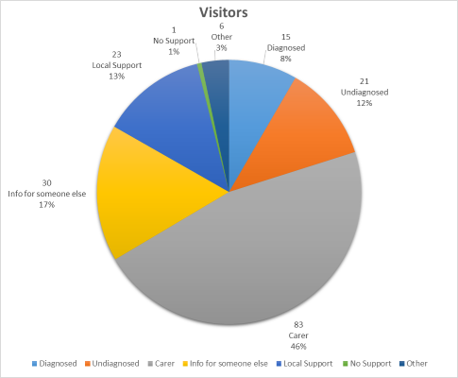 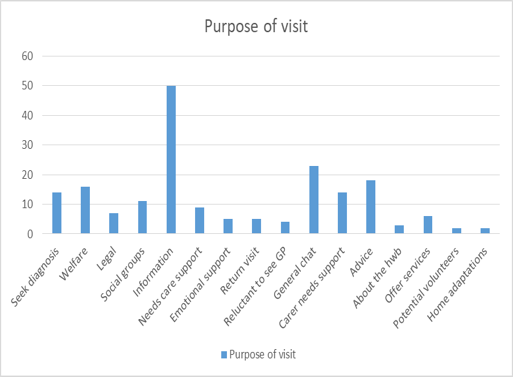 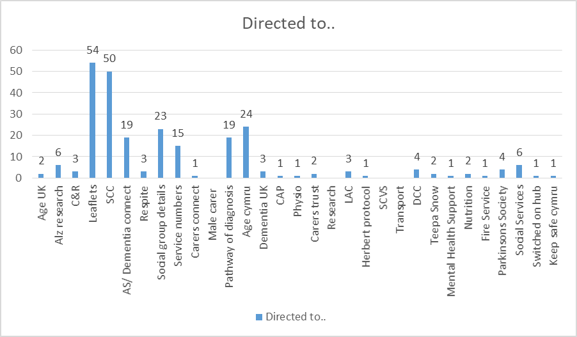 We have already started to display brief information on wider topics including mental health services and Parkinson’s disease and dementia. As we are the ‘Dementia Hwb’ it is important that we primarily hold information on Dementia, however, having a list of numbers for wider services could be useful.

We have broadband and a telephone installed so we can start to respond to people who cannot make it in person to the Hwb, although we are not advertising the telephone number anywhere it is for outbound calling currently.

We are now offering to complete online Blue Badge applications with people, and also the Herbert Protocol Forms for registering with South Wales Police. We are also linking up with Swansea BID to offer the Big Heart of Swansea cards and to become a recognised Safe Haven for anyone in the city centre.

In response to over 30 requests so far, we are looking into offering CANTAB Mobile Memory Testing in the Hwb – a self-contained technology that provides a first step on the diagnosis path after which we would strongly recommend the visitor seeks an appointment with their GP for further investigation if needed. We hope to offer this from June in the private back room with appropriately trained staff delivering this on specific days each week.

We have Bridging Funding from Swansea Council to keep us open until June, and are awaiting feedback on funding submissions. Thank you to all the supporters, volunteers and organisations who help make the Hwb happen. We couldn’t do this with out you.

Please get in touch if you need any information on dementia services in Swansea. Either send in an email to support@dementiafriendlyswansea.org or pop in to the Hwb. The Dementia Hwb is in the former Thorton’s shop next to Superdrug in the Quadrant Centre in Swansea. Open 7 days a week 11am – 3pm. (Except for bank holidays)