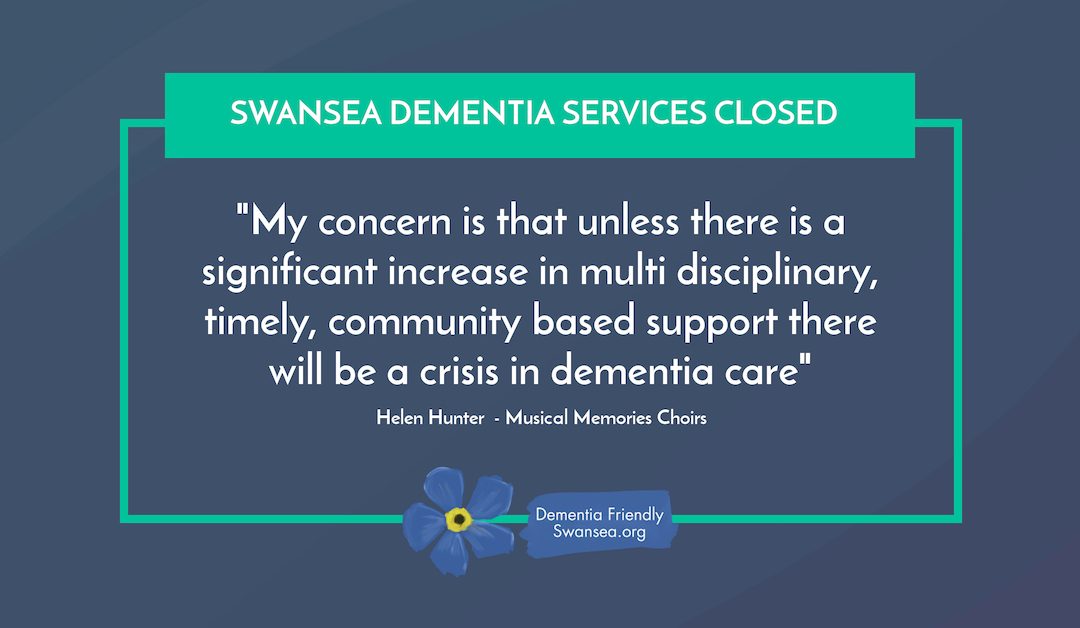 Swansea has always been a progressive city when it comes to dementia. In 2014, The Alzheimer’s Society recognised the work of the Swansea Dementia Supportive Community forum by recognising it as the first Dementia Friendly City in Wales. The Ambulance Service in Swansea was the first in Wales to become Dementia Friendly. Even this year Alzheimer’s Society Cymru has been chosen as a charity partner for Swansea City FC for the 2021/22 season.

Recently however services vital to providing much needed support to those living in the Swansea area with dementia have been closed down leaving a gaping chasm in much needed services and support. The Community Dementia Support Team has been closed down as of July 2021 and the Admiral Nurse Service was closed in 2020 after just three years active in the area. Dementia Friendly Swansea understands the only support now available from the Swansea Bay Health Board Dementia Pathway, appears to be medication support only, which doesn’t apply to all types of dementia.

“There Will Be A Crisis In Dementia Care”

Helen Hunter who runs the Musical Memories Choirs in the area told us that “Hearing that vital Dementia services have been closed down is very concerning. At Musical Memories Choir we are starting to re-engage with people living with dementia and carers after this long and difficult 18 months. Carers have had to show such resilience and strength to manage over the last 18 months with far less of the vital networks of support. My concern is that unless there is a significant increase in multi disciplinary, timely, community based support there will be a crisis in dementia care.”

Admiral Nurses – “A Marvellous Service, Second To None”

Admiral Nurses work alongside people with dementia, and their families: giving them one-to-one support, expert guidance and practical solutions. Between 2017 and 2020 Admiral Nurses saw and supported over 300 families across Swansea and Gower. The service was a vital one for those that used it as Kate and Angela explain:

“Marvellous service which is second to none. I don’t think without her we would have got through it. It’s a shame that people will be missing out on this service. Especially older people who have support from no-one else.” Angela

Similar stories can be heard regarding the Community Dementia Support Team. This service has been running in Swansea for 5 years and has assisted over 400 people. The service was created to increase the diagnostic rates and implement early intervention. They would receive referrals from CAP, (Central Access Point Swansea Social Services) GPs, OTs (Occupational Therapists) and home care providers regarding a patient who was displaying signs of confusion, memory loss, speech difficulties and behavioural changes.

“The support I have received from the Support Team has been genuinely life changing. I felt alone and totally overcome with pressure and responsibility. The main benefit of being supported by the Team is knowing there is someone there who has the knowledge, experience who can support me through my problems.” Anon

“[Provided] fabulous support to my Mum, my Sister and I in caring for my Dad who has vascular dementia…The loss of this service is a terrible blow for all full time carers on top of an EXTREMELY difficult year” Rachel

“I am the main and only carer for my husband who has advanced Vascular Dementia. We used to be able to attend Garn Goch for a weekly break and also a monthly carers meeting but that was cancelled at the beginning of this year. Along with COVID restrictions, socialising has been difficult!” Elaine.

These two critical services have been pivotal in the support of people with dementia and their families. I know, as I belong to one of them. My family received essential support from the Admiral Nurse service during the last few years of my Dad’s life. Dad was diagnosed with both vascular dementia and Alzheimer’s Disease around 2010. After a few visits from the Community Psychiatric Nurses and with his vascular dementia not having any medical treatment options, he was discharged from the Memory Clinic. Essentially given a terminal diagnosis and then left with no continuing healthcare support. We eventually found help for Dad and our family via 3rd party organisations including the Alzheimer’s Society, Swansea Carers Centre. However as Dad’s age advanced and health problems became more complex we were having incredible difficulties in being able to access the right health services and support, which we desperately needed.

The practical and emotional support provided by our Admiral Nurse ensured that Dad received the right medical care when needed. For example, he was able to be cared for at home by the Acute Clinical response team therefore avoiding an unwanted hospital stay. We had no idea that this service existed, and sadly neither did the GP at my parents’ local surgery, it was the Admiral Nurse who referred us. The service also helped in many other small but important ways. These include talking with Dad and holding his hand and making sure he had the correct medication so he wasn’t in discomfort. Additionally they would also spend time with both Mum and myself to find out how we were coping as a family and offer support where needed. This support was invaluable and made an extremely difficult time just that little bit easier for all concerned.

The closure of these services without any obvious replacement is a devastating loss for Swansea. No explanation has been given as to why they have closed. The closures are also more confusing when compared to services offered by Hywel Dda. Swansea has no Admiral Nurse service. Hwyel Dda have a specialist dementia wellbeing team, a first for any health board in Wales. There are seven Admiral Nurses plus Marie Curie specialist nurses for end of life dementia. These initiatives are in line with the Dementia Action Plan for Wales 2018-2022.

Within that Action Plan Vaughan Gething suggests “Reviewing and standardising the role of dementia support workers – increasing their numbers as required”. By closing the two services above Swansea have decreased the number of dementia support workers. For Wales’ first Dementia Friendly City this is crazy. Why don’t we have more Admiral Nurses in the area and what support is going to be offered to carers and those living with dementia in the future? These services – as our comments above testify – are vital to help those live as well as possible for as long as possible with dementia. Statistics show that the numbers of people with a diagnosis of dementia in Wales is increasing. Without Admiral Nurses and Community Dementia Support Team people with dementia and their carers will struggle – and that’s without the added problem of dealing with Covid. Swansea needs to urgently assess it’s services and support!

“The Community Dementia Support Team Has Not Been Cut”

We contact Christine Williams, the Interim Executive Director of Nursing for Swansea Bay University Health Board for comment regarding the cuts. She told us that “​​ the Admiral service was only operating in Swansea and was not successful in gaining additional funding via the Integrated Care Fund , unfortunately the 2 post holders also left the service”. She then explained that “there is a bid being progressed at the moment for a Regional service. The Community Dementia Support Team has not been cut and I am sorry if you had this impression, the Band 7 lead in Swansea is vacant but will be replaced, the previous post-holder has retired, and unfortunately the lead in NPT is currently on sick leave. The Dementia Support Workers have been linked into Mental Health services for support and to ensure continuity of services.”

Little Or No Support

While putting this article together we spoke to many carers who have used The Admiral Nurses and Community Dementia Support Team. The cutting of these services occurred without consultation with those affected. Cutting essential dementia services is also at odds with the Welsh Government’s Dementia Action Plan. Carers have told us that they now have little or no support from health services in the Swansea area. They feel that no-one listens to them and that they are being asked to constantly do more than they possibly can under increasingly difficult conditions.

Whilst Christine Williams’ response to our email does offer a small ray of hope it doesn’t help carers today. How long will it take for the Band 7 lead to be appointed, especially as it doesn’t seem to be currently advertised on The NHS jobs site? And one extra person isn’t going to make all the problems go away. People need support right now not when positions eventually get filled or funding is made available. None of the carers we spoke to seem to know who and where to turn to and this is a fundamental failure of communication. The carers are right! No-one is listening and the services which put Swansea at the lead of dementia care are no longer here. This must change. How can Hywel Dda be more progressive than the first Dementia Friendly City in Wales? How has this been allowed to happen? All of our loved ones who live with dementia deserve better.

About the Admiral Nurse Service

Dementia UK is the dementia specialist nurse charity. The charity’s Admiral Nurses provide life-changing care for families affected by all forms of dementia. Admiral Nurses are there when people need help. They have the time to listen and the knowledge to solve problems, and are a lifeline for families facing dementia.

Dementia UK’s Admiral Nurses work in local community services, GP practices and NHS hospitals. They also run the charity’s Dementia Helpline 0800 888 6678, which is open from Monday to Friday, 9am-9pm and at weekends, 9am-5pm, every day except 25th December.

About Admiral Nurse Service In Swansea

The service was set up in 2017 and closed in 2020 with two nurses covering the whole of Swansea and Gower. Over the 3 years, they saw and supported over 300 families in Swansea. The Admiral Nurses work directly with people with dementia and professionals across different health and social care settings, specialising in complex cases. As well as individual support, the Admiral Nurses provided education and training to a wide range of services and organisations including the Welsh Fire and Ambulance Services, GP trainees and for wardens of supported living facilities in Swansea. Admiral Nurses became an integral part of the health board’s part of caring for people with dementia and their families.

About the Community Dementia Support Team

The team worked in primary care undertaking a triage service. The team was created to increase the diagnostic rates and implement early intervention. They would receive referrals from CAP, (Central Access Point Swansea Social Services) GPs, OTs (Occupational Therapists and home care providers regarding a patient who was displaying signs of confusion, memory loss, speech difficulties and behavioural changes. The team would undertake assessments which were information gathering CANTAB (Cognitive Research Software), Mini Ace, Ace III, (Mini-Addenbrooke’s Cognitive Examination, a brief cognitive screening test) and talking to the patient and their families. Then they would eliminate those that did not have any significant memory concerns.

The patients that did have significant memory concerns were referred back to the GP for scan and blood tests. When the results came back the medical lead of the team would decide which patients needed referring to the memory clinic and which ones could be diagnosed within their team. The Community Dementia Support Team offered ongoing support to all their patients from the first meeting to end of journey that would include advice, support and signposting to other services. Members of the team would take patients for their scans if they did not have any family available. They would help in any way they could and were often the only support the patients and their families had.